Participation in the democratic process

Political engagement and participation in elections is the cornerstone of Australian democracy.

As a representative democracy Australia holds open and free elections at all levels of government to choose members that will speak and make decisions on behalf of the people. Voting for Australian citizens 18 years and over is compulsory and they must register to vote.

Australia is a representative democracy. Citizens elect representatives to speak in parliament and make decisions on their behalf. Voting for a person who represents your views allows you to have a say in the laws passed and decisions made by the parliament.

In NSW Section 5 of the NSW Constitution Act 1902 allows the elected Parliament of New South Wales to make laws for the “peace, welfare and good government” of the State.

What are the writs?

In the electoral context, a writ is a document issued by the Governor and signed by the Premier, commanding the Electoral Commissioner to hold an election. It contains dates for the close of rolls, the last day for nominations by candidates, the polling day and the day the writs are to be returned. The writs for 93 electoral districts in the Legislative Assembly and one writ for the Legislative Council are issued by the Governor and received by the NSW Electoral Commissioner.

In NSW, the Parliament expires on the Friday before the first Saturday in March every fourth year and the writs must be issued within four days of that day. Once the writs have been issued, candidates nominate for election to the Legislative Assembly or the Legislative Council.

Who chooses the order of candidates on the ballot paper?

The election manager for each electorate conducts a draw of the names of candidates in order to determine the position of candidates on the ballot paper.

Prior to an election, the NSW Electoral Commissioner will conduct a draw, determining the order in which groups and ungrouped candidates are shown on length ways across the ballot paper. Each group can choose the order their candidates appear vertically below the line.

Elections in NSW are conducted by the NSW Electoral Commission.

“We are legislated to conduct, regulate, and report on general elections and by-elections for the Parliament of New South Wales. We also provide electoral services to local governments”

During the campaign candidates speak to voters at a variety of forums, the electoral rolls are prepared, ballot papers for each electorate and for the Legislative Council are printed, polling places are prepared, postal and pre-poll voting is conducted.

On election day voters arrive to choose their electorate members via secret ballot.

Election day is always held on a Saturday so all can get to the polling booths that are open from 8am to 6pm.

At the entrance, representatives of the various political parties and candidates hand out “How To Vote” cards. Voters register on arrival and are marked against the electoral roll and must respond to three critical questions: “What is your name?”, “What is your address?”, and “Have you voted today?”. The voter is then handed two ballot papers – one for the Legislative Assembly and one for the Legislative Council. After completing them they are folded and placed in the allocated ballot boxes.

After the polling booths close the first preference votes are counted and the results are phoned-in to the state tally room where results are recorded on the tally board. Scrutineers for each of the candidates observe the counting.

Once the results are known, the Electoral Commissioner returns the writs to the Governor with all of the names of the candidates that have been elected to the Legislative Assembly and the Legislative Council. This must happen within 60 days of the writs originally being issued.

The Governor then appoints as Premier the leader of the political party that has won the majority of seats in the Legislative Assembly. On the advice of the new Premier, the new Ministry is appointed. Within seven days of the return of the writs the new Parliament must meet commencing its new four year term. The three main parties in NSW are the Australian Labor Party, the Liberal Party and the Nationals. There are smaller or minor parties such as The Greens, and the Shooters, Fishers and Farmers Party. As a result of optional preferential proportional voting in the Upper House, there are more diverse political parties in the Legislative Council with minor parties represented – Christian Democrats, Animal Justice Party, Pauline Hanson’s One Nation. A Member of Parliament who does not belong to a political party is called an Independent.

How do political parties become part of an election?

For a political party to be registered and contest an election in NSW they must have registered with NSW Electoral Commission at least 12 months before the election and their registration must include the names of at least 750 members (all registered NSW voters) and pay a registration fee of $2,000.

Each candidate can nominate for one Legislative Assembly electorate or for election to the Legislative Council. Independents must be nominated by 15 persons enrolled in the electoral district they wish to contest. They submit a nomination form obtained (from the NSW Electoral Commission) to the Returning Officer before noon on the day of nomination.

At noon, on the day of nomination, the Returning Officer for each electorate conducts a draw of names of all the candidates whose nominations have been accepted in order to determine the position of those candidates on the ballot paper.

Political parties hope to win the majority in the Legislative Assembly (Lower House) so they can form government and put their policies into practice.

An amendment to the Electoral Funding Act 2018 makes it unlawful for a person to make or accept a political donation in the form of cash over $100.

This new category of unlawful political donation came into effect from 1 January 2020.

Electing a Member of the Legislative Assembly NSW is divided into 93 electorates with one Member of Parliament representing each electorate in the Legislative Assembly. The boundaries of each state electorate are determined by a distribution process, set out in the NSW Constitution which provides for an equal number of voters in each electoral district (allowing for a maximum of 10% variation more or less than the average).

Redistributions occur when more than a quarter of the electoral districts do not have an equal number of voters and after every second election. 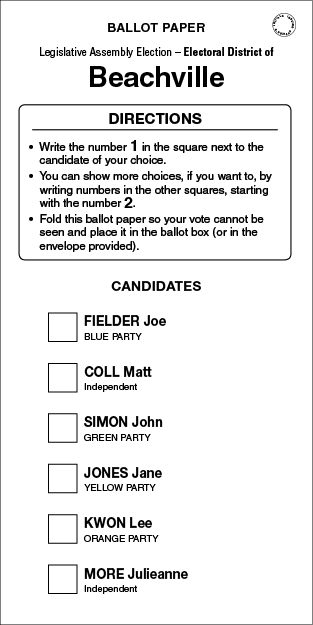 The Legislative Assembly also known as the  Lower House uses optional preferential voting. The voter places the number “1” in the square next to the name of the candidate who is the voter’s first choice. No other vote is necessary but in NSW the voter has the option of allocating as many preferences as there are members on the ballot paper. The preferences are placed in the squares next to the candidates. The order does not matter provided consecutive numbers have been used.

How are preferences decided?

The voter is fully responsible for their preferences and how they are allocated. Political parties hand-out leaflets on how to fill out ballot papers at elections however these are only suggestions.

As preferences are optional in the Lower House, those that have only one preference will be set aside,  ‘exhausted’,  after the single vote is counted. Those with two votes are exhausted after the second vote is counted, distributed and so on. Those ballot papers which are set aside as exhausted are not classified as remaining in the count reducing the number of votes remaining in the count and also reducing the number of votes required to be elected. The distribution process is repeated, eliminating candidates one at a time until a candidate has more than half the number of the votes left in the count i.e. until a candidate reaches over 50% of the vote or 50% plus 1.

When a member is elected in the Legislative Assembly to an electorate they represent on average 50,000 voters each.

Electing a Member of the Legislative Council

Members of the Legislative Council (the Upper House) are elected through an optional preferential proportional representation voting system. Parties or individuals are elected according to the proportion of the total vote they receive. 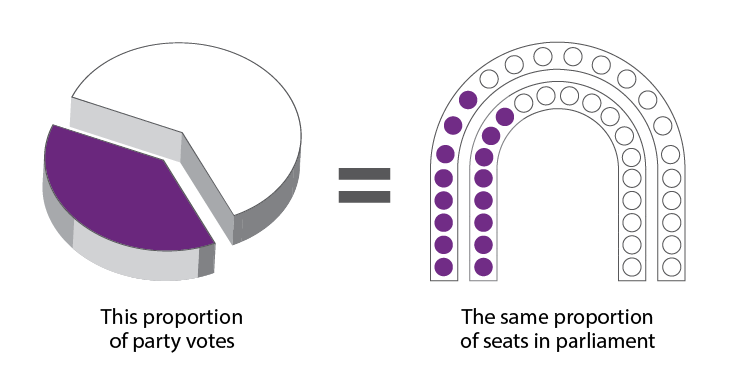 Electors may vote for Members of the Legislative Council in one of two ways:

Alternatively voters can choose to vote for more than one group above the line. You may record the number “1” in the square next to the name of the group of their first choice. Then vote “2” for your second preference and so forth for as many choices as you wish to make.

Each of the  21 candidates require a “quota” of votes with typically 4.55% of the total valid primary votes being sufficient for a candidate to gain a seat in the Legislative Council. If fewer than 21 candidates receive a quota, a process of transferring preferences from the candidates with the least primary votes begins until all vacancies are filled. The count and distribution of preferences are conducted using the NSW Electoral Commission’s computer system.

Achieving a final result is complex, as surplus votes (i.e. those a candidate receives above the quota of 4.55%) are redistributed to other candidates using a formula, and this process continues until all 21 Members of the Legislative Council have been elected. The ballot papers for the Legislative Council are then forwarded to the Electoral Commissioner for safekeeping until the period has expired during which the election can be disputed in the Supreme Court (acting as the Court of Disputed Returns) i.e. within 40 days of the return of the writ or, if a petition has been filed, the Court of Disputed Returns has made a determination, or the period of 6 months after the day of polling has expired.

The Parliamentary Electorates and Elections Act 1912 (NSW) contains information about how elections are conducted in NSW.  Read it here

The Constitution Act 1902 (NSW) provides for when elections are to be held in NSW – fourth Saturday in March every four years. NSW has had fixed election terms since 1995. Read it here.

Electoral Act 2017 (NSW) Part 7 sets out particular duties of the Electoral Commissioner throughout the electoral process. Read it here.