A Site Study visit to the NSW Parliament may be integrated with the study of Commerce. See our Secondary Excursion Guide to organise a visit to NSW Parliament.

The Separation of Powers

Australia’s system of government is based on the Westminster system inherited from Great Britain. The Australian Constitution brought into existence Federation in 1901 and sets out the rules by which Australia is to be governed. In addition, each State has its own Constitution.

There are three main types of power:

Each has its own responsibilities and each, to some extent, is separate from the other. Each also has some power or authority to check over the others. No one branch can control all power in a democratic system. This is referred to as the separation of powers.

The separation of powers is applied strictly at the Commonwealth level due to the structure and wording of the Commonwealth Constitution, particularly in insulating the judiciary from the legislature and executive.  In NSW our basic governmental structures were in place before the Australian Constitution. The separation of powers is less stringent, but remains an accepted practice through convention.

In NSW Section 5 of the NSW Constitution Act 1902 allows the elected Parliament of New South Wales to make laws for the “peace, welfare and good government” of the State. The NSW Parliament may make laws in all matters, unless that matter is specifically one where only the Commonwealth Parliament may legislate. The Parliament is known as the Legislature. The Constitution also outlines the roles of the Executive and the Judiciary as well as the Head of State.

The Separation of Powers in NSW

This is the law-making body in our democracy. NSW has a bicameral Parliament that is elected every four years. It is made up of two Houses:

Bills can be introduced in either House of Parliament but must pass both to become an Act (also known as a law).

As well as law-making, Parliament represents the people (through elections) and determines the Government (the party with an elected majority in the Lower House). It also provides an overview, or check, on the activities of the Government.

Currently in NSW the seats in the Legislative Assembly are distributed in the following way: 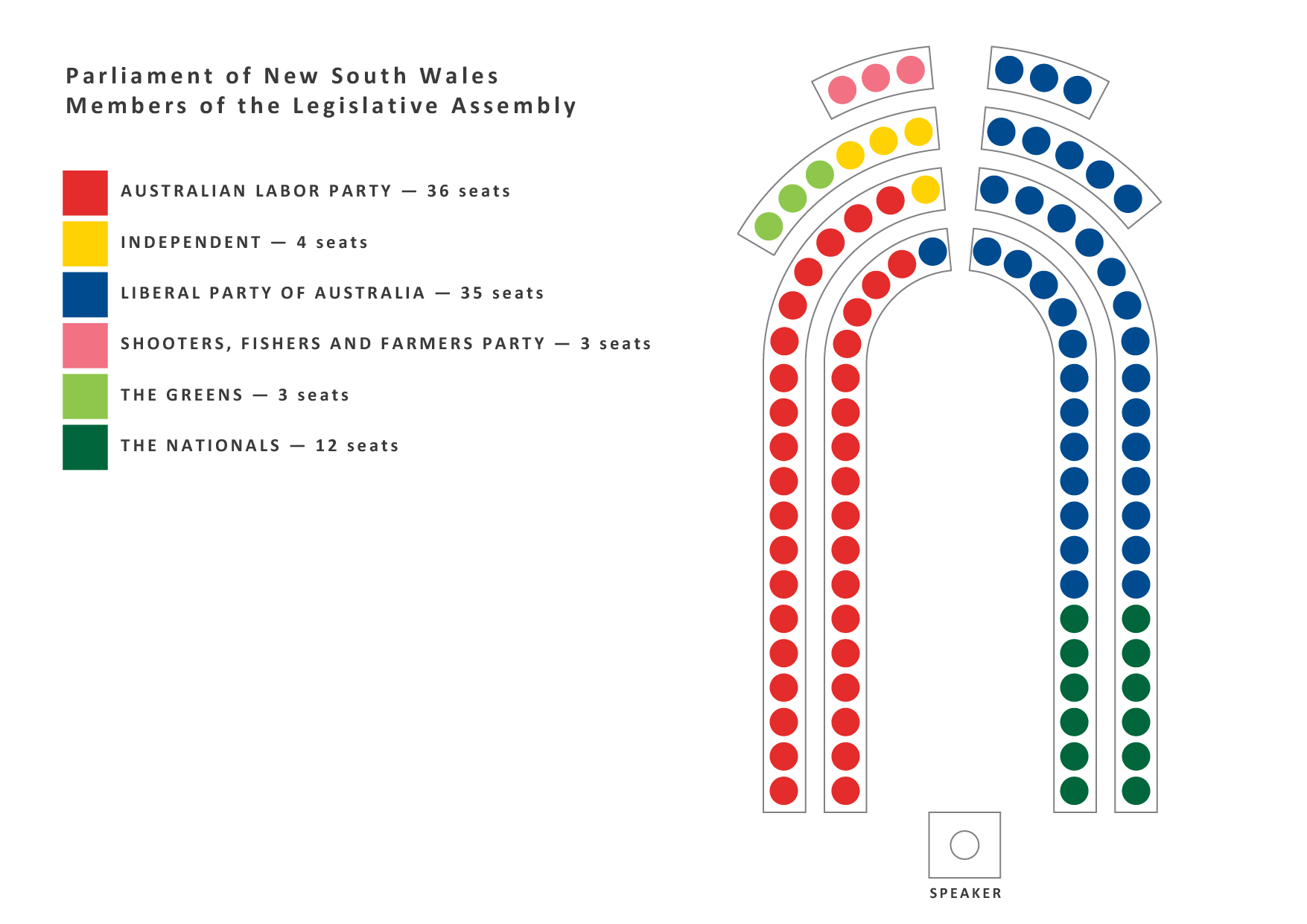 More than half, or 21, of the 42 members of the Legislative Council need to support a bill for it to pass. As shown in the diagram below, currently no one party in the Legislative Council has a majority of seats so the Government must negotiate either with the Opposition or with the Minor parties and Independents to pass a Bill.  This gives these members the balance of power as their decision to vote with or against the Government will decide if a Bill is passed. In Australia and other Westminster style governments, the majority party in the lower house of the Parliament (in New South Wales this is the Legislative Assembly) forms ‘the government’. The members of that party sit in the Chamber to the right of the Speaker and are referred to in parliament as “the Government”. Leading members of Parliament from this majority party become the Ministers, and the chief minister in the state is called the Premier. The Government is made up of the Premier and Ministers. Each Minister is responsible for one or more government department or agency  which actually carries out the activities of government. Members of the government who are not ministers are called backbenchers. They do a range of work for the government, including researching, participating in committees, making speeches and voting on bills. Like all the other members of parliament,  all members of the Government represent their constituents in their electorate.

The responsibilities of the NSW Government include:

What is Responsible Government?

Responsible Government means that the Government is created from, and accountable to, the elected legislature. In practice this means that the political party that wins the majority of seats in the Lower House after an election becomes the government and its leaders become the Premier and Ministers.

Ministers are responsible to, or must account to, the Parliament for their decisions and the decisions of the departments they are in charge of. This means that they must answer questions from members of Parliament regarding the decisions made by themselves and their departments.

To remain in government, a party or coalition must continue to have a majority of members of the Lower House. This ensures the government is accountable to the Parliament. If the government loses a majority of members and the parliament is able to pass a motion of no confidence in the government, the Governor may dissolve the Legislative Assembly before the fixed four year term expires and call an election or they can consider whether a viable alternative Government could be formed without dissolution. (Such a Government could be formed and act until the next scheduled election.)

In Summary: What is the Difference Between Parliament and Government?

To use a sporting analogy, Parliament is the whole game and the Government is the team with the most members in the Legislative Assembly.

Government is made up of the Premier and the Ministers, who come from the political party that won the most seats in the Legislative Assembly after an election. The role of Government is to propose some of the ideas that become laws and to put those laws into action. The Government also administers government departments to make sure that all of the State’s services are working properly.

The Head of State Judges are appointed by the Executive Government but cannot be removed except by a Parliamentary process. Judges interpret the laws and can even decide that a law passed by the Parliament is unconstitutional. They ensure that the law is applied fairly to all.