The Speaker of the Legislative Assembly in NSW

The office of Speaker dates back more than 800 years to 14th-century England. The Australian system of Parliament comes from the English Westminster system and retains many of the positions and traditions of that system. The position of Speaker is a critical one, essential for the effective functioning of Parliament within the democratic system of government in NSW. 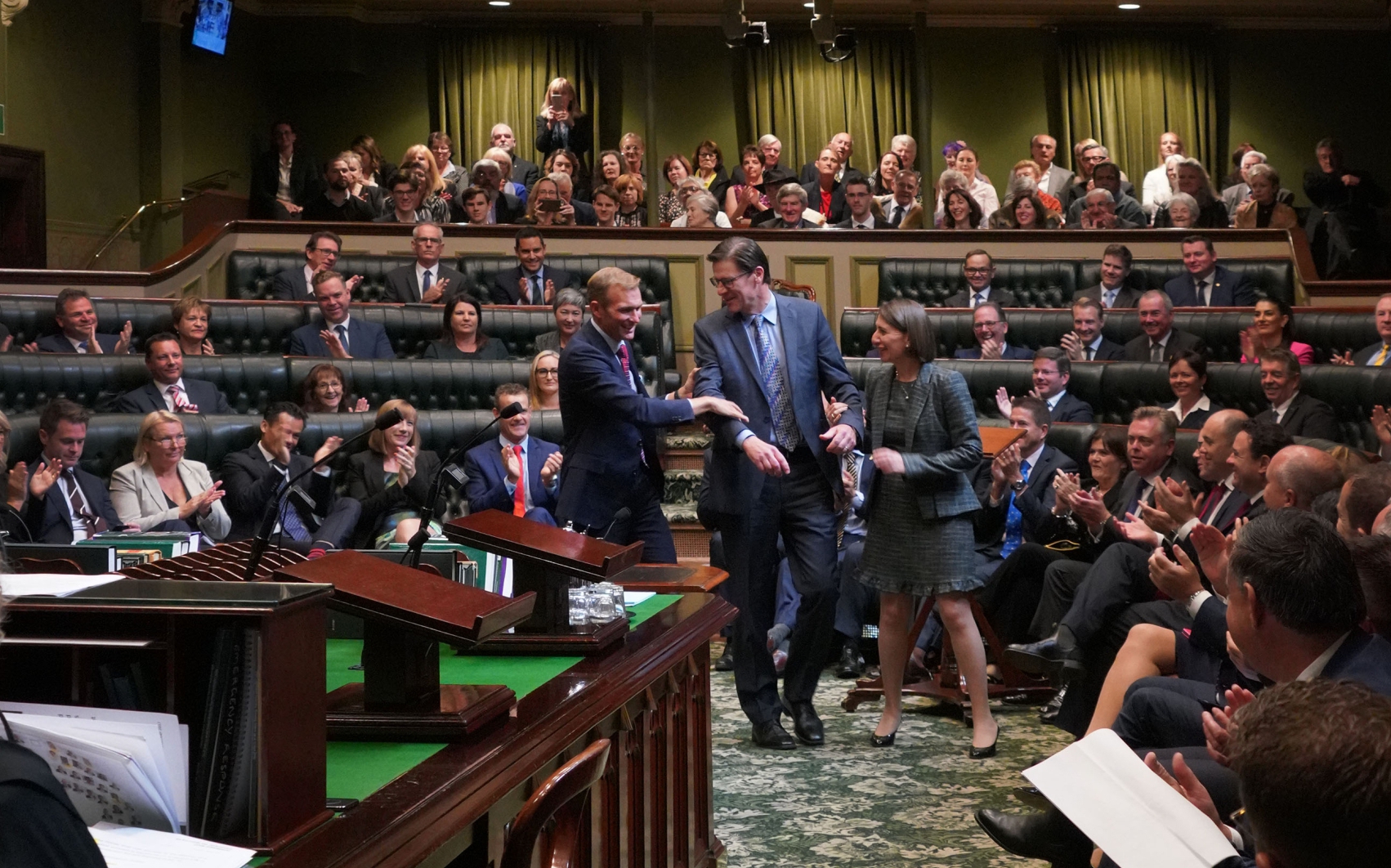 In medieval times, the Speaker was known by the terms Parlour (mouth), Prolocutor (chairman) and Procurator (agent). Each of these terms relate to a person who acted as a spokesperson or mouthpiece and therefore ‘Speaker’, who would communicate to the King or Queen on behalf of the people in the House. This was a dangerous position to be in. If the monarch didn’t agree with a message being communicated, what awaited was potentially imprisonment, expulsion, or even execution or murder. Hence the tradition of the appointed Speaker being reluctantly ‘dragged’ to the chair.

Sir Thomas More (1477 – 1535) was a famous English Speaker of the House of Commons and the only one to be both beheaded and made a saint 400 years later. He is the patron saint of politicians and statesmen. Symbol of the Speaker’s Authority

The mace is the symbol of the authority of the Speaker and dates back to the 14th century when it was more often used as a weapon to protect the king. It was carried ceremoniously by the royal bodyguards, known as the Serjeants-at-Arms, and utilised originally in France by Philip II (1165 – 1223) and in England by Richard I (1157-99). Eventually, the King appointed a Speaker and the Mace became the symbol of authority delegated from the King to the Speaker, and the authority of the House.

Today the mace is a prominent feature in many NSW Parliamentary ceremonies. The Speaker is preceded by the Serjeant-at-Arms, bearing the mace upon their right shoulder, when the Speaker enters and leaves the Chamber at the beginning and end of each sitting. The mace also accompanies the Speaker when he visits the Legislative Council, but it stays outside the Legislative Council Chamber on these rare occasions. Role of the Speaker of the NSW Legislative Assembly

The Speaker’s role is described under section 31 of the NSW Constitution Act 1902 No 32.

The Speaker holds this position from the date of their election, during the period of dissolution until the election of the new Speaker. One of the Speakers main jobs is to maintain order in the Chamber. They make sure that the Members follow procedures and obey the rules which are called the Standing Orders – a list of 369 rules (like school rules).  There are so many rules that the Speaker can ask the Clerk of the Legislative Assembly, who is a permanent officer of the  Parliament (not a Member) to help him interpret the Standing Orders.

The Speaker has disciplinary powers, described in the Standing Orders to allow them to maintain order in the House. If a member of Parliament doesn’t observe the rules, they can be warned or ‘called to order’; if they continue to be disruptive, they may be sent out of the chamber. Once a Member receives three calls (warnings) about their behaviour, the Speaker can order the Serjeant-at-Arms to remove the Member from the chamber. If they continue to disregard the Speaker’s authority, the Member of Parliament might be ‘named’ by the Speaker and the Assembly can resolve to suspend the Member. Repeated failure to ignore the rules might involve yelling, ignoring the Speaker’s rulings and decisions, or being disrespectful to the Speaker or other Members of Parliament.

There are 93 electorates and 93 Members in the Legislative Assembly. Each Member advocates strongly for their electorate and the chamber can be a place for heated debate. Question Time can become quite noisy and the word most used by the Speaker during Question Time is “Order!”

The Speaker chairs proceedings and chooses who may speak and in which order. After a debate, the Speaker organises the vote by Members of the Legislative Assembly on the bill being debated, and he conducts divisions. Divisions are a method of taking a vote where the members for or against are physically counted. A bell is rung during a division to remind Members to go to the chamber to cast their vote.

The Speaker ‘puts the question’ where the terms of the motion calling for action are re-stated before the House after debate has concluded. A division may be called for and the House divides into those supporting the proposition and those against it. The Speaker might say:

“The question is that the motion be agreed to, all those in favour say aye, all those against say nay.”

The Speaker also accepts the resignations of Members, and is authorised under Section 76 of the  Electoral Act 2017 to issue writs to fill a vacancy.

Traditionally, the Speaker wore Court Dress when in the Chamber. This included a black academic-type gown, a white lacy collar (called a jabot), and a full wig. ‘Court dress’ refers to the outfits that people wear in courts of law and in a royal court.

Speaker Sir Daniel Levy (1872 – 1937) is still the longest-serving Speaker of the Legislative Assembly in NSW history. He was Speaker for a total of 12 years and 10 months. He is seen here wearing the full Speaker’s wig, made of horsehair. This must have been quite hot in summer. He is also wearing a silk, academic-style full-length gown and a stiff collar and bow tie. The ornamental ruffle on the front of the shirt is called a jabot. Today, the current Speaker of the NSW Legislative Assembly, the Honourable Jonathan O’Dea MP, also the State Member for Davidson, wears a traditional gown but not the wig, bow tie or jabot. Much more comfortable in our Sydney summers.

The Speaker also has ceremonial roles and represents the NSW Legislative Assembly on official occasions such as commemorative services, conferences, as well as meeting inter-parliamentary delegations, Heads of State, dignitaries and foreign officials.

The Honourable Jonathan O’Dea MP is the 40th Speaker of the Legislative Assembly since the introduction of Responsible Government and a bicameral (two house) Parliament in 1856. Mr O’Dea was elected Speaker of the 57th Parliament on 7 May 2019. He is also the NSW Member for Davidson and a member of the Liberal Party, distinct from his role as the Speaker, which is impartial. The Speaker is addressed as The Honourable Mr Speaker. Find out who the current Speaker is in the Legislative Assembly here.

As the Speaker has the same responsibility for his electorate (Davidson) that other members have for their electorates, he has a Deputy Speaker who can stand in for him in the Chamber and when he is unavailable.