What is the Difference Between the Parliament and the Government? The NSW Parliament is made up of all of the members that have been elected to the Legislative Assembly (lower house) and the Legislative Council (upper house). Both houses are elected using different systems to ensure the people of NSW are adequately represented. 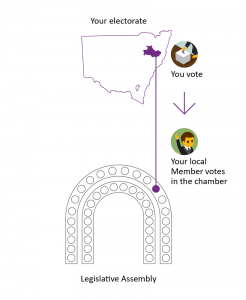 In the Legislative Council each member represents a proportion of votes received across the whole state: 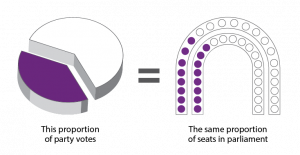 When Parliament ‘sits’ members of Parliament from the Legislative Assembly and/or the Legislative Council meet in their respective chambers at Parliament House in Sydney.  During these sittings the House conducts parliamentary business such as the introduction and debate of bills, Question Time, motions, private members’ statements and community recognition statements.

The role of the Government is to develop state policy, propose bills that may become laws, and to put those laws into action. The Government also administer the government departments that provide the state’s services, ensuring they run efficiently and effectively.

Here is a cheat-sheet that captures the different roles both play: